THE 21st edition of Otorohanga’s annual Farmers Party has been hailed an “outstanding success”.

More than 300 people attended Wednesday’s event at the Otorohanga Club which featured guest speakers and the first ever Oto Expo.

Organising committee member Cheyne Waldron says the new trade expo, held before the Farmers Party, has “revitalised” the event by giving business owners a chance to meet local farmers and showcase what they have to offer.

The expo, which opened to the public at 5.30pm, included a variety of stalls from farm machinery and vehicles to tyres, electrical services and more.

“The Farmers Party was one of the best events in its 21-year history and Nicki Raffills [event co-ordinator] did an exceptional job with the expo,” says Mr Waldron.

“The room was full and everyone I spoke to thought the night went really well. It was an outstanding success.”

During his speech, Mr Waldron focused on the positive outlook for the Otorohanga district.

“I stressed the importance of everyone working together, and that was what this night was all about. I also said the community has a number of great things going for it and things to look forward to including a new medical hub, a new playground, the possibility of a new dairy factory, the new gas power plant, Waikeria Prison’s expansion and the new sports stadium in Te Kuiti, amongst other things. “We live in a great community and have a great deal to look forward to and be excited about.” 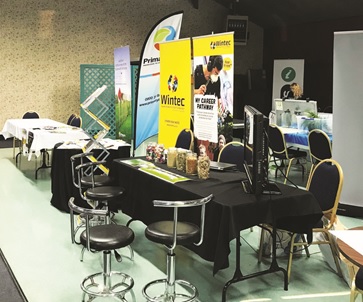